W.E. "Bill" Whitten, a 78- year resident of Staples, has one tale that has no end- he can talk and talk about his interest in bees.

"I like bees just about more than anything in the world." the spry gentleman said with real fervor, "And that`s saying a lot."

Whitten has more than 50 years experience with his own apiary. but his fascination with the furry insects goes back to childhood.

Whitten was born in Ackerman, Miss. in 1892, but his parents moved to San Marcos and settled on farmland near Hunter in 1895. Whitten said he was raised "under a cotton stalk." for his father raised the money crop all his life. Whitten was the fifth child in a family of 12 kids, who moved to Hutto in 1897, and to the Staples area in 1898.

"At that time, San Marcos was just a little ‘burg` there weren`t any topped roads to speak of, just dirt trails. When it rained you "couldn`t even get to San Marcos. Staples was a pretty thriving place back then, with two doctors, two drugstores, five or six stores and three blacksmiths. That was in the horse and buggy days when people would travel into Staples from the country in wagons to shop," he said.

Whitten’s curiosity about bees began when as a child, he was around his father’s three hives. Like most families then, his father aimed at self-sufficiency, raising most of the goods needed by his large family. "The bees were wild Spanish bees. Little, black, vicious bees that were hard to control. Once 50 of them got up into my clothes and started stinging me. All I could think of was to go and hide in the haystack by the barn where they couldn’t get at me," Whitten remembered.

If there is one thing he has learned from handling bees all these years, it is to be prepared. The stings don`t bother him much anymore because his body has become immunized against them. "If a bee stung me on the eyelid, it probably wouldn’t even raise a red spot," Whitten said. "But I still wear my hood and gloves when I fool with them. Despite what some folks say. there is nobody a bee won’t sting."

Rosie, Whitten’s wife of 63 years, also grew up in Staples. They met when she was 14 and he. 17. and married four years later. 'They raised eight children. who are now scattered from Angleton to Corpus Christi. Their youngest son is presently building a new home just a few hundred yards from the site of Whitten`s first home in San Marcos.

Rosie had a stroke several years ago and still cannot get around much, though she has made some improvement. In spite of her husband’s devotion to the insects, after all these years, Rosie still cannot stand bees.

Just after his marriage in 1913 while farming cotton, Whitten began to look around for a trade. His father had done all his own blacksmith work and Whitten decided to learn how. He and his brother ran a blacksmith shop for 30 years in Staples before a bout with rheumatism of the hip caused him to quit smithing and go into beekeeping fulltime. At one time, he had 300 hives and produced 15,000 pounds of honey. His apiary is now reduced to 100 hives.

"It would take a mighty big book to write all know about bees down and I`m still learning, " Whitten said. He sat in the chilly "extracting house" beside his home surrounded by vats, honey jars, and all the other equipment needed to turn out his 98 percent pure product. "If I was a little younger, I would like to open a bee school to teach amateurs about bees and hives. Right now, young people who are interested in bees come and talk with me. When I get on the subject, there is just no end to the talk," Whitten grinned. 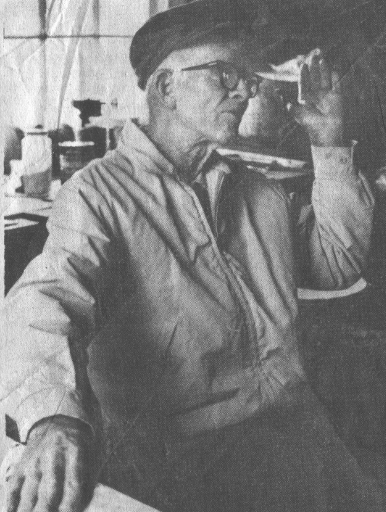 Whitten has always strived for perfection in his life, from learning his books "perfectly" in the little country school near Staples to processing the honey he has sold to a local supermarket chain for 20 years. He is particularly proud of his comb honey. He does not just break off little pieces and stick them in a jar, but sells whole racks of honeycomb just as it comes from the hive. He takes care of every aspect of the business alone, from robbing the bees and extracting the honey, to bottling and labeling it.

Most of the processing takes place in June or July when bees fill the empty combs with`honey in just two weeks. During winter months, the beehives are sealed off and the bees live on stored honey. Whitten won`t check on them again until spring, but will spend the winter repairing equipment to be ready for the busy summer season.

This may be the worse honey crop in 50 years for Whitten`s bees due to a 15 day rainfall in the spring when many bees starved to death. He could have fed them, he said, if only he would’ve known the rains were going to last so long. Flowers yield no nectar to feed the bees during a rainfall.

The best flowers for feeding his bees are cotton blooms, which are no longer abundant, hubram clover. mesquite and a roadside weed, horsemint.

A second interest for the beekeeper is grafting and budding fruit trees, which goes along with his first passion very well. "Bees are important to orchards and crops through pollinization. You can’t get good seeds without bees," Whitten said. About five years ago, most of the 100 peach and plum trees in his orchard were destroyed by hail. He also is a self-taught man in the art of raising fruit trees.

Whitten reads to stay current on his favorite topics, and constantly experiments with new ways to handle bees and process honey. One invention which helps keep his honey from burning when heated, is an old bathtub with a false bottom inside. Large cans of honey are placed on the wooden stand while water circulates in the tub to melt the honey at a slow and even rate. Heating honey too fast can result in a dark color and heavy taste.

While searching through boxes for the whitest honecomb to display, Whitten critically replaced several before pulling one out and holding it up in front of a window. As he held the glistening four pounds of honey and wax he said, "Nothing made by human hands can even come close to imitating honey. It`s the best sweet there is."

And few people can come close to imitating the pure joy and zest of Bill Whitten when talking about his favorite "hobby".